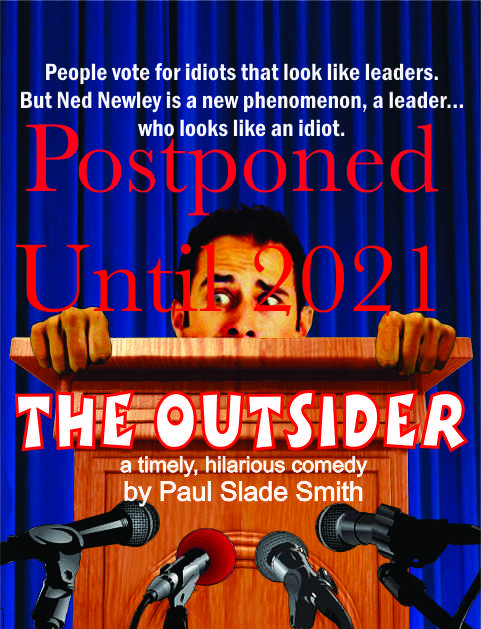 In the midst of a political scandal, Ned Newley, the ultimate policy wonk, is unexpectedly thrust into the position of Governor. Ned Newley doesn’t even want to be Governor. He has no political instincts, a paralyzing fear of public speaking, and his poll numbers are impressively bad. Ned might be the worst candidate to ever run for office. Unless the public is looking for… the worst candidate ever to run for office. Politics is a visual medium. People vote for idiots who look like leaders. But Ned Newley is a new phenomenon: a leader… who looks like an idiot. In politics, the less you know, the higher you’ll go! At once a razor-sharp comedy and a sincere tribute to democracy, The Outsider is a timely and hilarious take on modern politics.

PAIGE CALDWELL, female, 20s to 40s. A professional pollster. A
smart, confident woman with a professional’s view of politics:
she sees it as a series of contests to be won.
DAVE RILEY, male, 30s/40s. The Chief of Staff to the new Governor.
Very smart, but—despite years of experience in government—
endearingly earnest and naive on the subject of politics.
LOUISE PEAKES, female, 30s to 50s. A temporary employee hired
as the Governor’s executive assistant. Personable, likable,
impressively confident, and entirely inept. Without knowing
it, she has the air of a politician about her. The friendliness
of her smile, and the confident way she looks you in the eye,
would make you think, “I’d vote for her.”
NED NEWLEY, male, 50s/60s. The new Governor. A person of
impressive ability, but a complete lack of confidence. A man
awaiting permission to enter a room in which he is already
standing.
ARTHUR VANCE, male, 50s/60s. One of the most experienced and
successful political consultants in the country. His overbearing personality, and confidence in his own opinions over the
opinions of others, should make him dislikable, but his ego is
more than tempered by the joy—even glee—he brings into the
room. He’s a showman, but his excitement is 100% genuine,
and it’s contagious.
RACHEL PARSONS, female, 30s. A TV reporter. She has the looks
to be an on-air correspondent—though, if television had never
been invented, she still would have been a journalist. Straightforward and honest, and inquisitive by nature. She’s seenenough of life—and politics—to be cynical, but she’s more apt
to make a wry joke.
A. C. PETERSEN, male, 30s to 50s. A TV camera man. A working
man, and—for most people—the guy you didn’t notice was
there. Which is fine with A. C.; he has a low tolerance for idiocy,
and would rather not interact with anyone. His near-silence
doesn’t make him seem unfriendly, just a bit of a mystery

Visit our Archives page for photos and information about many of our shows — almost ninety years of proud community theatre.